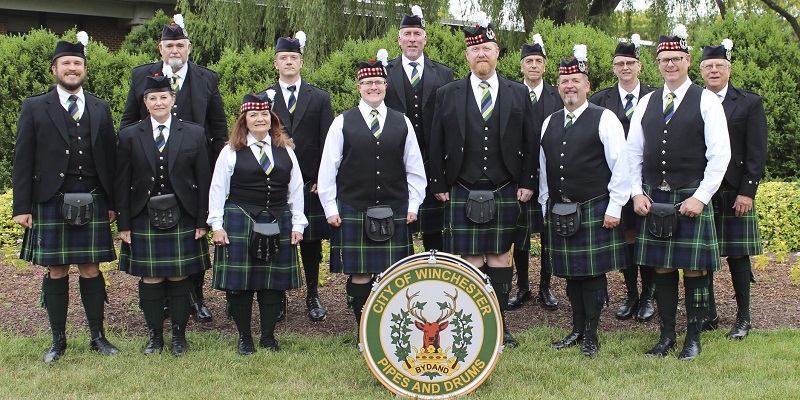 As the official pipe band of the City of Winchester, Virginia, we perform traditional and seasonal music on the Great Highland Bagpipes and Scottish Drums at various parades, ceremonies, and events in Winchester and across the region. We are an all-volunteer band from a variety of backgrounds and are always seeking new members, from beginners to experienced musicians. As members of the Eastern United States Pipe Band Association, we also compete in Grade 5 at various Highland games and Scottish/Celtic festivals. The band and individual musicians are available for hire.

Hire a piper... or the whole band!

If you are interested in joining the band, reach out to us about attending a practice and meeting the band. If you are seeking a tutor for pipes or drums, give us a shout and we can connect you with one of our instructors or someone in your area.

Winchester, Virgina
323 or 686
oohay or liamg
City of Winchester Pipes and Drums

Have you always wanted to play the bagpipes or the Scottish drums?

Contact us and we can set you up with reasonably priced tutors for pipes or drums! While the instruments can be pricey, practice chanters for pipes and practice pads/sticks for drums can be had for under $100 while you see if it's the instrument for you. It generally takes 6-12 months of playing the practice chanter before you move on to the full set of bagpipes, depending on the aptitude and musical experience of the student.

Pipe bands consist of just four different instruments: bagpipes, snare drums, tenor drums, and bass drums. Our band is currently seeking additional members for all instruments. Whether you are a brand new beginner, a lapsed piper or drummer looking to get back into it, or a proficient musician seeking a band to join, we would love to hear from you! 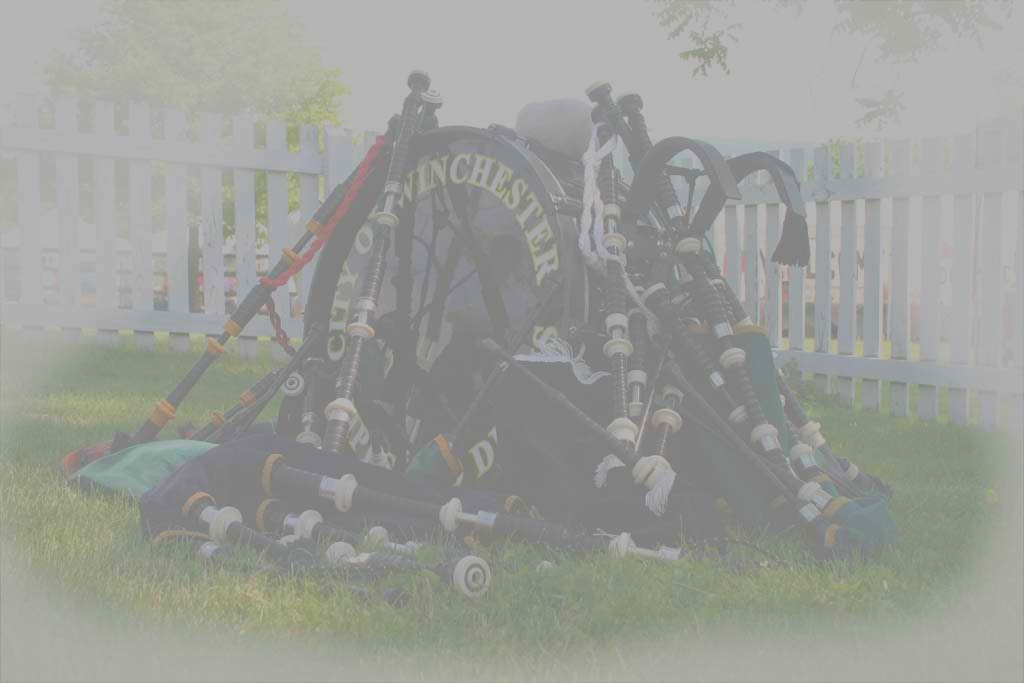 History of the band

City of Winchester Pipes and Drums is a musical organization dedicated to the highest standards of bagpipe music performed on the great highland bagpipes of Scotland. The band officially formed in July of 2002 and initially called itself The Northern Shenandoah Valley Pipes and Drums. At its core were six friends who had been playing together informally in the northern Shenandoah Valley for several years. In 2002 they were joined by five other bagpipe enthusiasts and several drummers who were committed to learning the pipes and highland drumming and forming a band. The band's first public performance occurred in October of 2002 when, at the request of City of Winchester officials, the band provided music for the dedication of the new Timbrook Public Safety Building in Winchester. So pleased were city officials with the performance that the City Council voted to adopt the band as the official pipe band of the city and our name was changed to The City of Winchester Pipes and Drums.

Along with learning music the band set several goals in its first year. One was to purchase uniforms and equipment and to march and perform in Winchester's Apple Blossom Festival Grand Feature Parade. This parade is one of the largest in the country and attracts nearly 300,000 people. Both goals were met and the band was smartly turned out for this event in new Gordon tartan kilts, Gordon regimental ties, white military-style shirts with City of Winchester shoulder patches, white hose and black ghillie brogues. The band's performance was outstanding and well received by the thousands of on-lookers. Another goal was to obtain a 501(c)3 status as a charitable organization. This goal was also met and has helped enormously in our efforts to raise money to retire the nearly $35,000 debt incurred in the purchase of uniforms and equipment. The final and perhaps most important goal was to provide pipe music for organizations and events in our area. Each year the band performs at many events including memorial services for public safety organizations, highland games, several Relay For Life events, religious services, Memorial Day and Veterans Day services, and community parades and festivals.

Even from its first years, the band has made a tremendous impact in making the communities of the northern Shenandoah Valley more aware of and appreciative of pipe music. The band is in great demand and has played engagements as far north as Deep Creek Lake in Maryland and as far south as Roanoke, Virginia.

Band members come from all walks of life and include a dentist, educators, students, engineers, business executives, a director of a nonprofit organization, a police officer, a computer programmer and a member of the Coast Guard. All members are dedicated to excellence of performance as evidenced by some members' willingness to commute more than fifty miles one way for weekly band practice. The City of Winchester Pipes and Drums looks forward to a bright future as we grow in proficiency and add to the culture of the communities we serve.